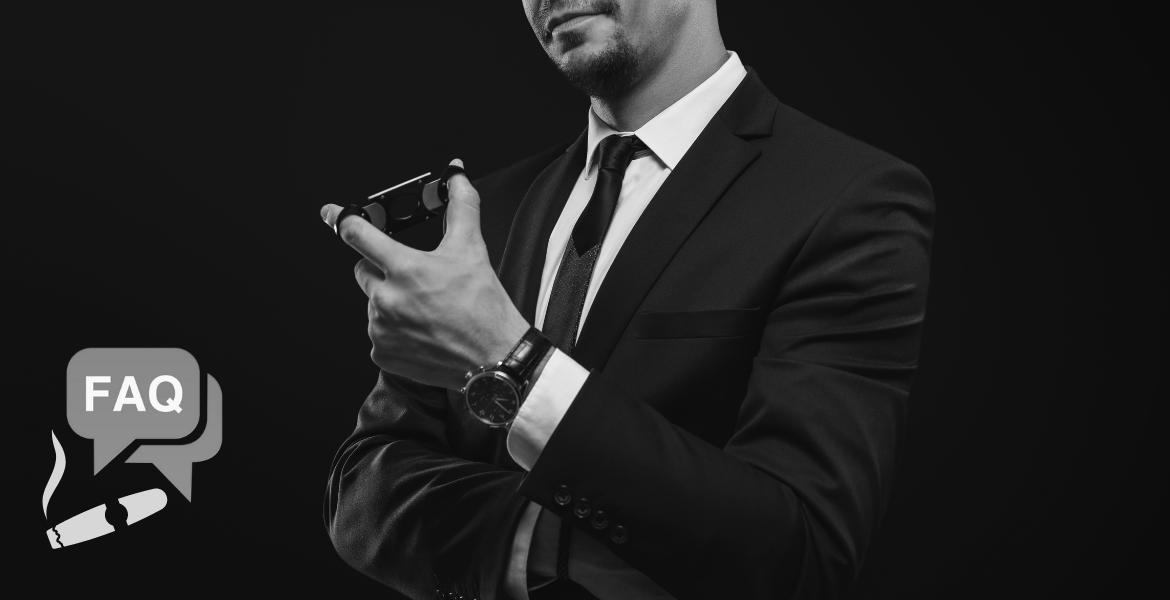 At Richard’s HOC one of our missions is to educate readers about the finer points of cigar smoking and to provide the most complete and accurate information possible to help smokers further their enjoyment of cigars. We try our best to answer readers’ questions.

In no particular order, here are answers to 10 of the most commonly asked questions about cigar smoking. If you’re new to cigars, you will find this section invaluable, and if you’ve been smoking for years, you may learn some things you had not previously considered.

My cigars are overhumidified. What can I do to restore the humidor to optimal conditions? Can the cigars be saved?

In most cases, the cigars can be saved. Overhumidification is a problem, especially prevalent during summer or in warmer, more sultry climates. But there are ways to combat it, and to ensure that your humidor stays in top shape year-round.

Adding cedar strips to the humidor—you’ll find these in many cigar boxes—will help maintain optimum moisture levels. Put a strip or two on the bottom of the humidor, a strip in the middle, and another on top, and you’ll watch the humidity reading drop as the cedar absorbs the humidor’s extra moisture. Just keep an eye on the cigars, and add or remove cedar until you’ve reached the desired humidification.

The one thing you should not do is simply leave the lid of the humidor open—this can lead to wild fluctuations in humidity, and turn cigars that are too moist into dried-out cigars in a short time. Another thing to consider is the number of cigars in your humidor; if you have a very large box containing few cigars, the smokes may absorb more than their proper share of humidity.

Although I generally use guillotine cutters, I was recently given a stylish wedge cutter. What’s the difference, and will I damage my cigar?

Wedge cutters were conceived decades ago, when the average cigar was much thinner than it is today. They were designed to open up a larger opening to channel the smoke, which is a consideration for lonsdales and coronas but generally not an issue for thicker cigars such as robustos. As a general rule, we prefer guillotines, as cigars cut with wedge cutters can accumulate tars that do not build up when using a straight cut. Also, wedge cutters tend to be imprecise in comparison with straight cutters, and you run the risk of damaging the cigar.

The third type of cutter that has become popular is the bullet, or lance, cutter. This type of cutter makes a circular hole in the head of the cigar, and it, too, has its drawbacks. First, it is easy to pierce the cigar too deeply, creating a tunnel near the head that makes the cigar burn hot. Also, as with a wedge cutter, the bullet hole left in the cigar’s head allows tars to build up near the mouth of the smoker, frequently altering or souring the cigar’s taste.

I’ve noticed a powdery substance on several of my cigars. What is this, and need I be concerned?

If the substance has a whitish color and can be easily dusted off the cigars without leaving residue, fear not. What you have in this case is “plume” (also called bloom), a natural occurrence caused by the cigars’ sweating off some of the oils that are inherent to tobacco. Just dust off the cigars prior to smoking them.

If, however, the residue is more of a bluish color and leaves a stain on the wrapper when you dust it off, the cigars are the victims of mold. Mold is frequently caused by high temperature and humidity levels, so keeping your humidor near the optimal 70 degree/70 percent humidity mark will help avoid this problem. Also, mold can be caused by not using distilled water in your humidification device, so know what sort of water you are using.

Occasionally some of my cigars will develop holes, and I’ve seen some small bugs crawling around my humidor. What should I do?

Beetles cause one of the most devastating problems found in humidors because they can quickly decimate a cigar supply and are difficult to combat. Beetle larvae are microscopic and occur naturally in tobacco, and, despite the quality control efforts of manufacturers, are frequently in cigars that make it to market. Once the temperature reaches 72 degrees, the beetles can hatch; they crawl through the cigars, creating those small round holes that essentially destroy a once-good smoke. But they can be combated by keeping a vigilant watch on your humidor’s temperature, and perhaps by installing a beetle trap in your humidor. In addition, beetle larvae can be killed by freezing the cigars. Just put them in your freezer for three days, then move them into the fridge for one day. After you’ve frozen the cigars, though, take care to slowly acclimate them to rehumidification, lest the wrappers on the cigars crack

Other bugs you may occasionally run into are wood mites—small, white insects that are often the result of opening a fresh wooden box of cigars. The good news is that these mites won’t harm the cigars, and they don’t live long enough to seriously damage your humidor.

My tobacconist sells many box-pressed cigars. Why do manufacturers do this? Is there an advantage to box-pressed smokes over round cigars?

Box pressing is a stylistic decision, and it neither makes a cigar better nor worse than a round cigar. Lots of people favor the feel of a box-pressed smoke, and some manufacturers feel box pressing can correct potential construction flaws. But it is an aesthetic decision as to whether you prefer this style of cigar. Box pressing says nothing about the quality of the cigar, nor of the person who smokes it.

What is the best way for me to age my cigars?

Many collectors choose to age their cigars in boxes, keeping like cigars together. Also, it’s a good idea to age cigars at a slightly lower temperature and humidity level than normal, and then to move the aged smokes to a desktop humidor when you’re ready to begin smoking them.

Many cigar brands, especially Cuban brands, are available in cabinet presentation, where the cigars are banded together with a ribbon in a format that makes them ideal for aging and long-term storage. While aging boxed cigars is certainly acceptable, these cabinet-packed smokes make even more attractive aging candidates, and therefore frequently command higher prices at auction.

Many cigars are sold in individual cellophane overwraps. Should I remove the cellophane prior to placing the cigars in my humidor? What about tubes and bands? Are cigars best stored “naked”?

Cellophane serves several purposes on a cigar—in states that require each cigar to have a warning label, it makes this notification much easier to accomplish, and it prevents damage to the cigars from excessive handling in cigar shops. But once you’ve bought the cigar and are placing it in your humidor, we recommend you remove the cellophane. Cellophane will prevent humidity from reaching the cigar, and you’ll find the cigars will respond to humidification better if the overwrap has been removed. The same holds true for cigar tubes, whether glass or aluminum; these tubes will completely close off a cigar to humidification if left on. However, if you intend to transport your cigars \(such as in a coat pocket\), it may be a good idea to keep a few tubes or cellophane overwraps handy to protect the cigars during transport.

As far as bands are concerned, it’s a matter of personal preference. Some people like to remove them, but when possible, we generally choose to keep the bands on \(outside of our tasting procedures, of course\). First, it makes identifying the cigars much easier, and it also prevents inadvertent damage to the cigar’s wrapper that can occur while removing the band.

Can I use my Zippo lighter to light a cigar?

It’s probably not your best option. We suggest using wooden matches or, better yet, strips of cedar called spills. These will light your cigar without imparting to it the taste or odor of the oil found in lighter fluid. If you wish to use a lighter for your cigars, we recommend one that uses butane as its fuel, as these types of lighters are odorless. However, some smokers insist on using their old Zippo lighters, which may have sentimental value. If you’re one of these people, just make sure that when lighting your cigar, the flame of the Zippo does not touch the cigar’s foot. Once the cigar is lit, you may also choose to give the cigar one (and only one) outward puff, to clear it of any impurities caused by the lighter fluid.

My grandfather always dips his cigars in Cognac or rum. Is this a good idea? Why does my tobacconist warn me against it?

Your grandfather probably started doing this decades ago, when cigars were shipped drier and humidification technology was not what it is today. Dipping the cigars in those years helped impart moisture to a dry cigar. Today, however, cigars are generally shipped and stored in optimally humidified conditions, and dipping a cigar in Cognac or rum will only serve to make your cigar soggy. What’s more, the smoke will not taste like what it was dipped in, another reason we strongly recommend leaving the Cognac or rum in a glass, and enjoying it alongside your cigars.

I’ve been told you should only smoke a cigar halfway. Is this true? How can I tell when a cigar is done?

The golden rule here is that a cigar is done whenever you’re no longer enjoying it. But as a general maxim, we smoke our cigars about half to two-thirds of the way down. The reason is that a cigar gets hotter and more powerful the further down you smoke it, and its flavor changes as tars and moisture build up near the cigar’s head. Smoke it too far, and you risk ruining the great flavor you’ve been enjoying. But this is simply a suggestion—if you’re still enjoying the cigar as its lit end is about to burn your fingertips, go right on smoking it. Cigar smoking, after all, is about enjoyment.

Enter your email below to be the first to know.